February 13, 2016 Monica Evans-Lombe Leave a comment
When disasters strike, children are often victims. These events, ranging from mass-casualty gun violence to tornados, overwhelm available healthcare resources. Emergency medical service providers, such as paramedics and EMTs, often are called upon to triage disaster victims. Training for this rarely performed yet crucial task, which greatly impacts patient outcomes, is inconsistent across the country. Didactic sessions may not yield improvements in knowledge or triage practice, and simulation sessions can be difficult to deliver for large groups of prehospital care providers, due to logistics and cost.
With sponsorship from an AHRQ Grant, simulation researchers at the Yale School of Medicine have developed a serious video game entitled 60 Seconds to Survival: Pediatric Disaster Triage. The team is completing Phase I of a research study, in which the effectiveness of the video game as a learning modality will be determined. Paramedics and EMTs will complete a live simulation of a mass casualty shooting at a school, and serve in the role of triage officer, assigning color coded triage tags and delivering quick life-saving interventions. Two-thirds of study participants play 60 Seconds to Survival, while the remainder has been randomized to not play the game. Game players are instructed to play the game for 15 minutes a week for 13 weeks. At the end of thirteen weeks, all participants return to complete a similar live simulation. It is hypothesized that game players will perform disaster triage, with fewer incidents of dangerous overtriage (using high priory resources for patients who are not critically ill or injured, at the expense of patients who need those resources more) and undertriage (failure to recognize critically ill and injured patients). 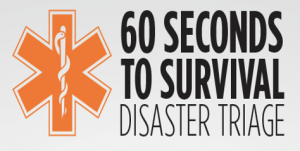 Through INSPIRE, the 60 Seconds To Survival Team has successfully recruited over 40 sites for the next phase of the study, in which large numbers of prehospital care providers will play the game, and the effectiveness of the video game as a learning modality can be determined for the population of learners as a whole, and for subgroups, such as older learners, inexperienced paramedics, and prehospital care providers across the US and Canada.

We welcome novice, intermediate, and expert researchers and educators within simulation to join.

Society for Simulation in Healthcare

The work of INSPIRE continues to grow. Each year we offer more opportunities to present research and continue to expand our funding awards. In order to support the sustainability and growth of our community we ask for your donation.

Your contribution is invaluable to the work we are all doing in pediatric research, innovation and education!

Society for Simulation in Healthcare